While Pi drifts on his lifeboat, Richard Parker, the tiger, stares at the surface of the ocean and begins a dream-like journey into the depths.
The sequence is shot as one constant descent from the surface towards the bottom of the ocean.
We meet a school of tuna and a shark in a photorealistic environment before witnessing the battle between a giant squid and a sperm whale – who transform into multiple animals from Earth and Sea.
The journey continues; passing a Lantern Fish, macroscopic planktons and a cosmic environment where particles provide a vision of Pi's mother.
The descent finishes on the wreck of the Tsimtsum, the ship Pi and his family had been traveling on before the storm.

This part is the link between the real world and the mental journey.
It had to be as realistic as possible in terms of animation, rendering and effects (particles, rays of lights, atmosphere) so it easily linked to the previous shots by Ang Lee.


Design
We went through several designs as we researched the look of the shark and the tunas.

Animation
As this was the beginning of the journey, and still connected to the real world. Ang was very particular about the composition of how the school of tuna filled the frame and that the animation of the shark and tunas were credible.

The main visual challenge for the entire sequences was the rendering of the underwater environment. Even if the whole sequence happens under a clear moonlight, the underwater mood needed to be realistically dark. And even darker and darker as we were descending. But we had to be able to register the events underwater as well.
We had to strike a balance between the feeling of getting deeper and the ability to always keep a luminous environment, sometimes making it less realistic and more fantastic so we can see the animals.

This part had a giant squid attacking a sperm whale. During their struggle, it appears that they are indeed composed of different overlapping animals. At the end of the battle, all of the animals separate in a designed choreography.

Design
This part of the sequence marks the transition from the real world of Tunas, Sharks, Squids and Whales – into more of a fantastical journey. Where Whales can transform into a myriad of animals.

The Sperm whale is composed of a hippopotamus, a rhinoceros, 2 crocodiles, a giraffe, a baby elephant, a zebra, a lioness, 2 foxes, a bear, a boar, and a leopard
The squid is composed of 2 sharks, 3 tunas, a dorado fish, a turtle, a gulper fish, a manta ray and 2 jellyfish.

To do so, BUF went through several rounds of sketches to come up with the best configuration. Each animal was judiciously and adequately placed depending on its proportions and size.

Technique
No less that 20 different animals. A whole 3D bestiary was constituted with the basic steps of modeling, skinning, rigging, texturing and creating fur settings for some of the animals. This work on the characters was advanced in every detail so that close up shots were possible if required.
Dynamics were applied on the animal's fur and skin to visually recreate the sense of floating in the underwater environment.
To satisfy the request for the transition from the body of the sperm whale to the whale's form comprised of animals, we explored many avenues with Ang. We had tests where the skin was tearing apart, which we felt gave it an organic feeling. Although these tests were visually interesting, they were not part of the final version. In the end Ang was happiest with the skin simply shrinking and fading away.

Animation
The animation is composed of two distinct parts. The first concerns the battle of the squid and the sperm whale. The second concerns the separation of the animals.

A great deal of work was focused on the battle to give weight to these giant underwater creatures and to underline the violence of their struggle.
Multiple propositions were submitted and discussed with Ang – how they entered frame, their position in frame, their performance, when they transformed to animals, etc - before ending up with the final version.

For the animal break-up, numerous questions were asked: How would the animals detach themselves? Which position will they be in underwater? Should they swim or just float? How should they be composed in the frame? When should they exit frame? We could only find these answers through repeatedly choreographing the shot.

Once this overall timing was set, the individual animal animation could start.
The animation team reviewed as much reference of animals underwater as they could find, so they could analyze and imitate the actions. This type of animation is all the more delicate because it is using animals in an unfamiliar situation (giraffe, rhinoceros, boar swimming underwater).

The dive into the deep continues with the discovery of a Lantern Fish and the transition to the macroscopic world of bioluminescent plankton.

Design
Continuing Ang's dream-like underwater world, we encounter a fish that does not escape this fantasy. It is the combination between two species; the head of an Angler or Lantern fish and the fan and tentacles of the Vampire Squid. This mix makes it so special.

Technique
In addition to the design, the challenge of this part was the change of scale. We go from a human size scale to the much smaller scale of planktons in a short amount of time.

It is very subtle camera work to obtain a soft and constant movement from one scale to another and avoid any disruption in the rhythm. We had to be sensitive to the depth of field changes, which is an essential factor to help manage the change of scale, as well as the parameters of the focus speed and the intensity of the blur.

Beyond these sensitive camera issues, we had the aesthetic challenge of the look of the planktons - their colors, their chromatic changes, some plankton needed to leave a luminous trail behind them. We tested various watercolor effects to help define the artistic direction.
Once everything was balanced in 3D, the rendering of these effects evolved along the way through Ang's comments.

From the microscopic world of the plankton, we then go to the gigantic scale of an underwater galaxy constituted of bubbles and nebulae. The journey through the cosmos leads us toward the millions of particles that form into an Indian Kolam flower pattern. The Kolam transforms into the face of Pi's mother and we dive through her forehead.

Design
Ang's concept for this part of the journey is inspired by galaxies and constellations, into which BUF incorporated the elements of the underwater world with elements such as bubbles, fish and particles suspended in fluid.

Technique
BUF used a procedural system developed on Thor to create multiple random and organic “branches” composed of particles. This system generates the look and impression of nebulae.
We had to adapt the system to meet the specific expectations of this sequence - being an underwater universe.

Most parts of the Cosmos required the use of particles and fluid dynamics, especially for the transformation from the Kolam flower to the face of the Mother.
Thousands of particles were generated as stars, then oriented into one position (the Kolam) and then into another (the Mother). Into which we then had to animate a fish swimming through and disturbing the particles. The path of the fish creating a wake via fluid dynamics, like the wake of a boat on water.

The camera continues to move closer and closer to the Mother and travels into her “Bindi” in the middle of her forehead. It required an enormous amount of particles to create the face, to give thickness to the forehead and then give the illusion of a tunnel of particles as we travel into the forehead - especially in 3D.

The dive ends at the bottom of the ocean where we discover the Tsimtsum, the wreck of the ship used by Pi and his family. After a few moments reflecting on the wreckage, the camera flies up rapidly and emerges from Pi staring at the surface of the ocean.

Design
For this part, Ang wanted a phantasmal mood with the wreck as the source of the light. In the early designs, the ship had some transparency which allowed to see inside to the cargo - a kind of “X-Ray” effect.

With each presentation, Ang went back to a more realistic aesthetic, less spectral. In all, approximately 20 design images were submitted to him in order to define the best look of the scene: Should the ground be sandy or rocky? Should there be impacts on the ship and if so how damaged? Should there be rust on the ship? Where does the light come from? As we descend, at what point is this light apparent?


Technique
Once the design was chosen and approved by Ang, the replication in CG was much more simple. We then had to adjust the scale so the ship appears big enough, even though it could fit the entire frame. In this case, it was essentially a stereoscopic adjustment. We had to find the right setting so that the wreck seems far away but not tiny like a miniature.

Mainly, the stereoscopy remains a challenge. The rendering time is multiplied by 2 (1 frame for each eye) and it requires precise settings for action that needs to fill the depths of the scene as well as effects that happen close to camera.

With such a dive underwater, the stereoscopy needs to reinforce the feeling of distance between the viewer and the characters (schools of fish and the shipwreck, far from camera) and immerse the viewer with elements in the foreground (floating particles, animals and microbes coming close to camera).

With a wrong setting for the stereoscopy, the distance between the two eyes becomes too big and it is difficult for the brain to resolve the picture. In this case, the viewer will feel uncomfortable.
For this reason, the stereo settings required subtle attention to better serve Ang's vision and enhance the stereo experience. 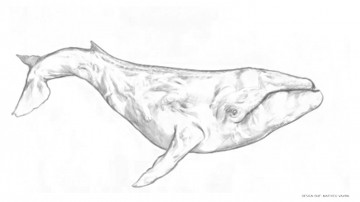 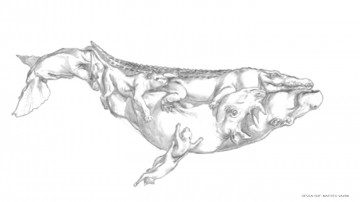 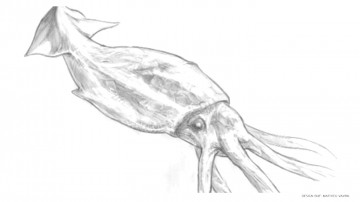 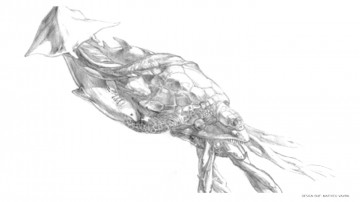 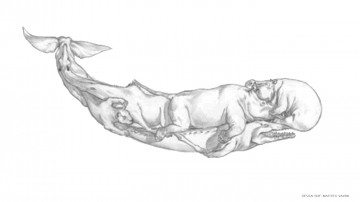 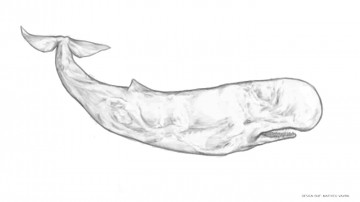 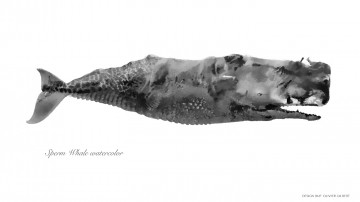 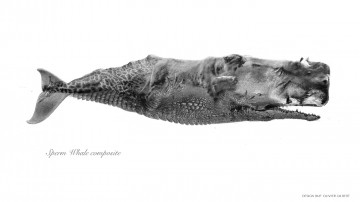 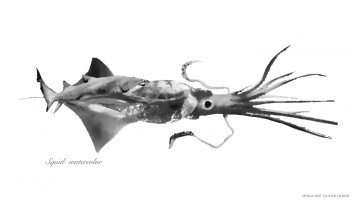 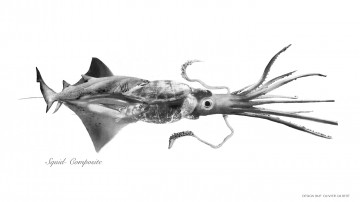 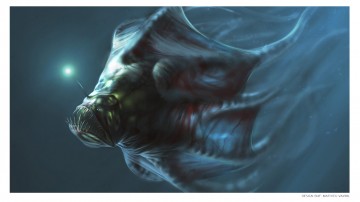 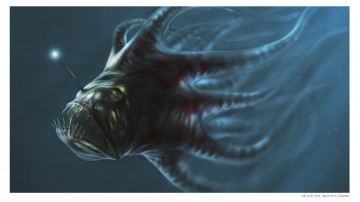 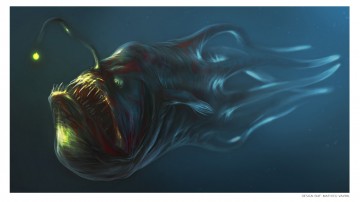 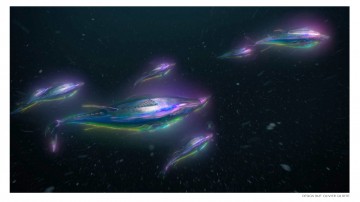 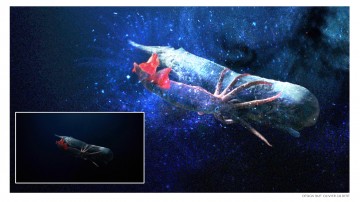 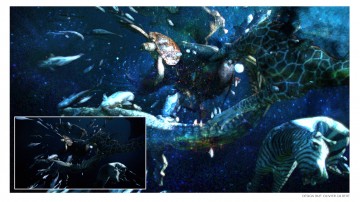 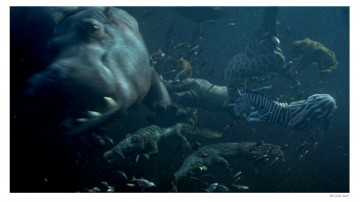 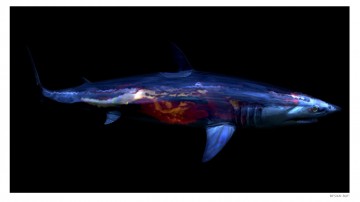 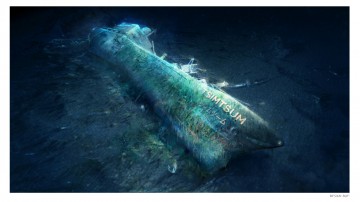 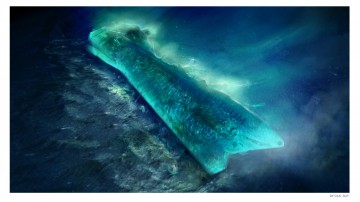 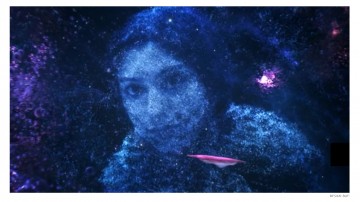 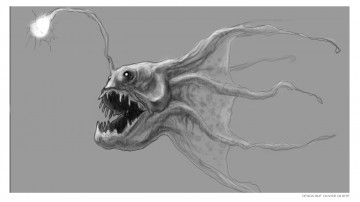 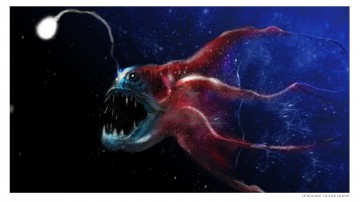 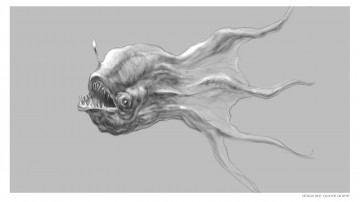 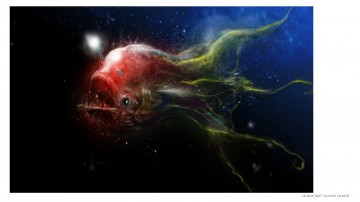