Our work on Kingsman: The Secret Service was to illustrate the explosion of chips implanted in the neck of the accomplices of Valentine.

This effect is mostly condensed in one sequence where the explosions occur one after another in a musical choreographic manner. Within 9 shots, 216 heads explode. The challenge was to propose a particular explosion design highlighting the ballet look of the sequence while avoiding the “gore” moments of a head exploding.

To achieve the effect, we based our work on realistic simulation referring to unusual references:
- The heads explode watermelon-like
- The blood projections are discreet and quickly pulverized
- The steam/smoke resulting from the explosion is multicolored and generates a graphical mushroom-cloud
- The explosions are joined by sparks streams reminding us of fireworks 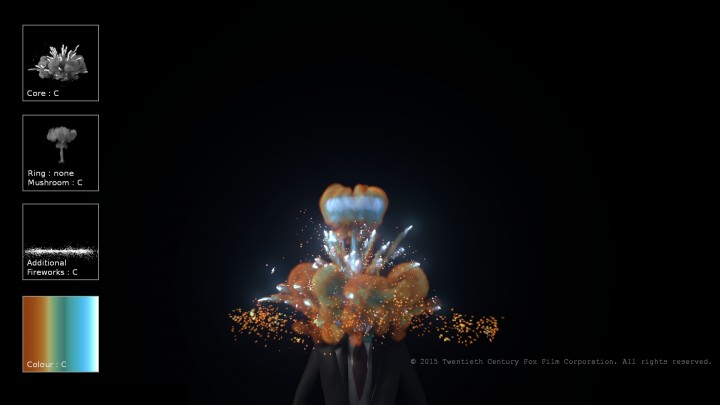 On a technical point of view, the explosions are divided in successive steps based on different kinds of simulations.
- Ignition: the neck lightens up where the chip is placed while light begins to spread around the neck.
A procedural texture lightens and breaks the 3D model of the head matching it with the plate. Rays of volumetric light are created through the holes.

- The head divides up and explodes like a watermelon.
The head is automatically divided into pieces. Their movement and collision are then simulated using “solid simulation”. Each fragment generates a blood trail, using “liquid simulation”; the blood being shaped as “blobby”. These elements disintegrate rapidly.

- The shock wave
A 3D model shaped as a ring is generated around the neck. This expanding model holds a procedural texture which will allow displacement of the plate while compositing in order to simulate air distortion.

- The mushroom-cloud
From the body of the explosion rises a mushroom-cloud. Based on a fluid simulation, these elements can then be deformed using specifically-designed path.

- The color
The tint of the smoke is given through a image defining the color according to the temperature.
This color grade is also used to color the fireworks and the different lights of the explosion allowing us to create a harmony through the different elements. 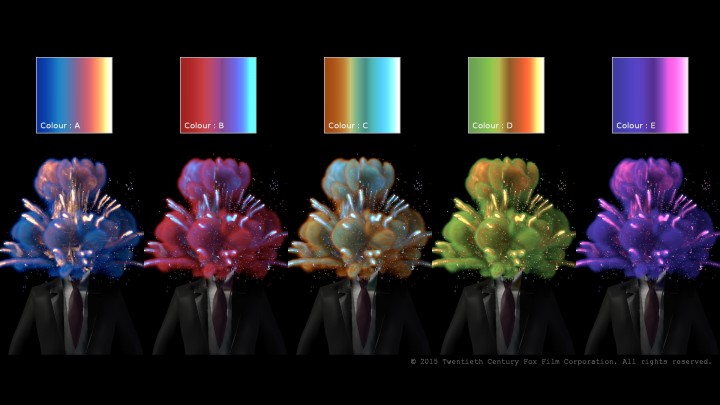 Most of the simulations were calculated in advance during the setup stage in order to then be used within the shots. In order to provide more diversity, we offered a range of 5 versions for each of the most recognizable elements: 5 shapes of body x 5 shapes of mushroom-cloud x 5 sorts of fireworks x 5 colors = 625 variations were possible!

On top of that, 3 frame rates were used for the simulations: 24, 48 and 96fps – Some shots being more or less slowed down.

SHOTS within the SEQUENCE

Aside from the explosions, the shots required a substantial amount of compositing work.
Most of them were shot as multi-layers and included set extension. 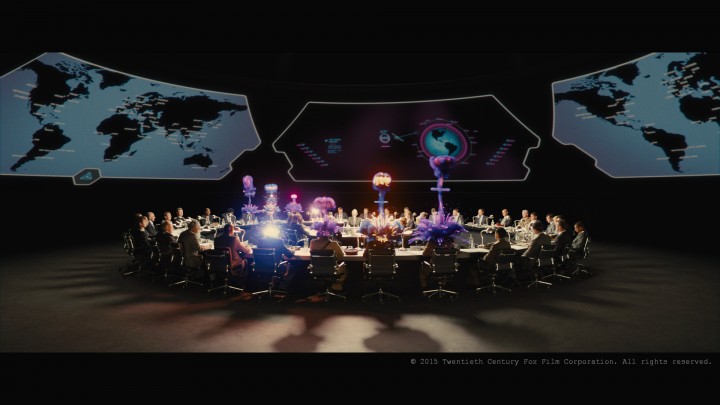 To comp the explosions into the shots, we had to:
- Track the camera
- Matchmove the set and characters in order to be able to render with interactive lighting
- Clean the exploding heads of the actors
- Reproduce the lighting in CG so the smoke clouds were rendered with the appropriate light
- Match an explosion per character, depending on the music tempo, create harmonies in the use of colors and, in some cases, design the path of the mushroom-clouds.

In most of the shots, the explosions were rendered based on the simulations created during the setup stage.
Only the one below from the Prime Minister shot, in ultra slow motion, was simulated and rendered separately. 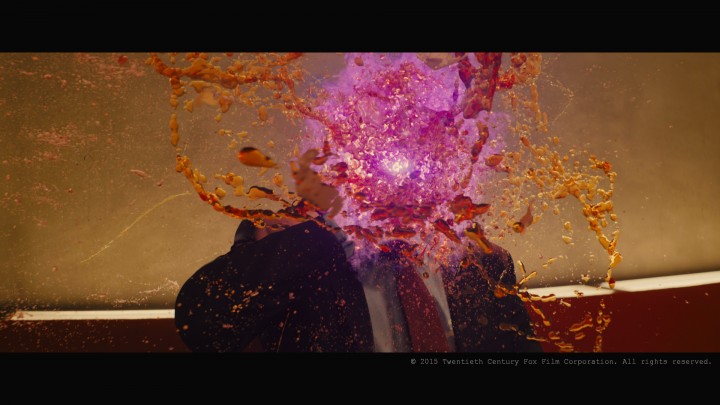 5 transitions were established between the shots. The challenge of these shots was to make sure we get a coherent choreography throughout the sequence.
That is why we created a system allowing us to easily manipulate timings, shapes and, colors of the explosions.

In this shot, beforehand in the movie, the explosion is simply suggested.
The issue was to color the splashes on Harry's face so as to prefigure the explosion sequence.